Establishing breastfeeding is often more complicated after a difficult birth. Sadly many people who experience a traumatic birth may also experience a sense of failure and loss for not being able to breastfeed, especially if they really wanted to. The good news is that although you cannot have complete control over the way you give birth, breastfeeding is quite a different story.

I had read other people’s stories about medical staff’s reluctance to trust the natural process of breastfeeding, their fear that the baby wasn’t getting enough food and their eagerness to give formula at the first sign of trouble. To counter that, I had bought a breast pump, and I even had it with me during birth just in case I would have a long hospital stay. Even if the baby had been too exhausted to drink at my breast, I would have pumped my milk and fed it to him with a bottle. Even if the doctors insisted on giving formula, I would have pumped, just to keep my milk supply going so I would be able to breastfeed later. Yes, of course the supply would dwindle over the course of a week or not get up to speed properly, but that’s a temporary problem. As long as there is some milk, the milk supply can be increased very easily by continually putting the baby at the breast and/or using a good quality pump to stimulate milk supply. Even if you have no milk, and even if you have never been pregnant or if you have reached menopause, it is possible to start breastfeeding. You might wonder why (and whom) you would want to breastfeed in the latter two cases, but consider adoption. Breastfeeding an adopted baby is not only possible[1], it is also recommended by the American Academy of Pediatrics.

There is a concern that the baby would not be able to learn to breastfeed anymore after a week, but that is very hard to believe. It might take a lot of patience (and sore nipples), but surely the baby could learn. After all, feeding from the breast is completely instinctual. How could a baby lose that instinct completely after a week? There’s a lot of talk and concern about “nipple confusion”. The recommendation is to “not offer a soother or milk from a bottle in the first three weeks or until breastfeeding is firmly established”. The rationale is that suckling from a teat (or soother) is very different from suckling from the breast and so the newborn might not learn to breastfeed properly if he gets confused. An added problem is that drinking from a bottle requires less effort and so the baby might prefer the bottle and hold out for it, thereby reducing nipple stimulation and consequently milk supply. Other infants simply prefer breastfeeding to bottle-feeding. Perhaps in some cases this is a valid concern, but surely not a common problem. Breastfeeding is difficult the first couple of weeks. In most western countries society does not really promote nor support breastfeeding, so the slightest real or perceived problem may deter a mother from continuing to breastfeed. My personal conclusion after talking to friends and reading many testimonials is that usually there is no problem. It might be an issue in some cases, but one that can be overcome relatively easily with the right support and knowledge. Both my children drank from a bottle (of pumped breastmilk) from the first week of their life and took the soother when we got desperate, mainly during nappy changes. They never got confused and they always preferred drinking at the breast. We used a nipple-shaped soother (imported from the U.S.) and a nipple-shaped slow-flow teat from Medela to mimic breastfeeding as much as possible. Needless to say, I had all that in my hospital bag, ready months before my due date. Ok, I admit I was a bit obsessed with my preparations. Better to have it and not need it than to not have it when you really need it!

But even if the improbable happened and my baby refused to drink at the breast after a week of bottle-feeding, I still could have kept pumping my milk. There are pumps on the market (and in France their rental is reimbursed by your health care system) that mimic a baby’s suckling very well and so they successfully stimulate the milk supply just like a baby does. In fact, my Australian friend Kelly managed to exclusively feed pumped milk to her baby for nearly three months without ever breastfeeding her baby directly after the first week. She did this because she had one flat nipple and her baby didn’t manage to latch on correctly. Then she got used to pumping from one breast and feeding from the bottle, so she decided to do this for both breasts. Although it is a hassle, it is possible! All that’s needed is the motivation and will to do it, the support from your environment (this is usually the most critical part), and the knowledge that it’s possible. Knowledge and preparation, including preparing to have a supportive environment, can make all the difference. And just in case you thought it was impossible: Kelly’s baby eventually did learn to breastfeed successfully directly from the source after three months of taking milk from a bottle.

I’m urging you to gather a lot of knowledge and information during pregnancy, as I did through extensive reading, but in reality we can never prepare for every possible outcome. Things happen that you cannot think of in advance. I feel confident that many mothers, who could have made the breastfeeding work, have given up because of lack of knowledge and support. Even in an extreme situation like Kalina’s[2] I believe breastfeeding could have been established. And even if one fails, it’s more empowering to know the options and to make one’s best effort. In the end that’s the only thing anyone could ever expect of themselves. It is also exactly the thing that prevents one from feeling powerless, and in doing so it can avoid a lot of future misery and resentment. 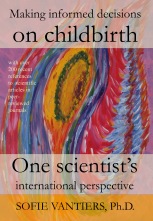 Ask a question or leave a comment Cancel reply